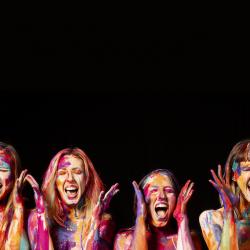 Tuuletar’s second album Rajatila / Borderline (2019) has gained raging reviews and been playlisted on radio shows all around the world. The raw and fragile sound of the second album draws inspiration from trip hop, art pop and ancient spells and folktales.

The band’s debut album Tules Maas Vedes Taivaal (On Fire and Earth, In Water and Sky (2016) was a huge international success and won the prestigious EMMA award (the Finnish equivalent to the Grammy Award) for the best ethno album of the year.  In 2017, Tuuletar’s song Alku was sold for the HBO hit tv-show Game of Thrones.