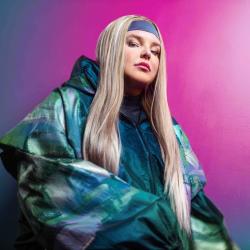 Tones And Initially laid the foundation for Welcome To The Madhouse last year with the release of “Fly Away,” a poetic and powerful composition which has amassed over 200 million streams with Tones And I delivering performances of the song on Jimmy Kimmel Live! and The Ellen DeGeneres Show. She followed it up in 2021 with the release of “Won’t Sleep,” which arrived alongside a Tones And I, Nick Kozakis and Liam Kelly directed official music video continuing what has become a tradition of highly unexpected and unforgettable visuals. Both tracks reflected the inimitable idiosyncrasies of Tones And I’s signature style, highlighting her clever lyricism, unpredictable songcraft, and indisputable knack for a hook.

Tones And I’s global smash “Dance Monkey” was declared the most Shazamed single of all time, and officially became the 3rd most streamed song of all time on Spotify making the track the most streamed song ever by a female artist on the platform. The “Dance Monkey” official music video has surpassed 1.6 billion views on YouTube, while the track has eclipsed six billion streams globally and earned 4x platinum certification from the RIAA in the US as well as multi-platinum or diamond certification in sixteen other countries. Plus, “Dance Monkey” hit #4 on Billboard’s Hot 100 chart, making “Dance Monkey” the first top five Hot 100 hit solely written by a woman in over eight years. In Australia, “Dance Monkey” holds the all-time record for the most weeks spent at #1 on the ARIA Singles Chart, while in the UK “Dance Monkey” has made Tones And I the longest running #1 of all time by a female artist on the Official Singles Chart. The New York Times detailed the making of “Dance Monkey” in their Diary of a Song video series, speaking with Tones And I about her journey from local busker to global star.

Originally from Australia’s Mornington Peninsula, Tones And I traveled to Byron Bay in early 2018 to take a chance at busking. On the first day she had crowds spilling onto the street. Tones quit her retail job and decided to make Byron her new home where she lived out of her van for a year, honing her songwriting and busking every weekend. A year later, she had one of the biggest songs in the world with her global smash “Dance Monkey.”