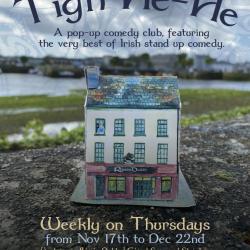 Initially launched in early May as a pop-up comedy club, Tigh He-He has proven a hit with Galway audiences, so we are keeping the laughs coming through winter.

A hero of the underground comedy scene, Colum McDonnell is an amazing act. Colum has starred in “Bridget and Eamon” and “Irish Pictorial Weekly” on RTE and “The World Stands Up” on Comedy Central. Over the past decade, Colum has established himself as a regular on the Irish and UK comedy circuits, with his unusual and often self-deprecating outlook on family, life, love and the pain of being the last-living hobbit in Ireland (underground… geddit?)

With support from Al Porter

Back after five years, one of the biggest names in Irish comedy is starting over.
First time round he opened for Michael McIntyre and Katherine Ryan, was nominated for Best Show at Edinburgh Fringe, sold out Vicar Street, Cork Opera House, Live at the Marquee Cork and Soho Theatre London. He was also, in his own words: immature, an idiot, and let a lot of people down.
Now, he’s older, wiser, sober and restarting from scratch. He’s also poised to be sharper and funnier than ever before as he road-tests new material at his first shows in half a decade.
★★★★ “a steamroller crowd pleasing talent” - The Guardian
★★★★ “charisma to fill the 02” - London Evening Standard
★★★★ "shades of Dave Allen...born to be on stage" - Chortle
Your host Karl Spain

Karl Spain has long been established as one of Ireland’s most popular comedians, from his own tours and touring with others, and has appeared at festivals all over the world. Karl has worked with some of the world's greatest comedians ( his peers ahem, cough).

Karl has spent most of 2022 touring with Kevin Bridges because Kevin finds him very funny - or because Kevin uses Karl to remind him to keep the weight off. Hopefully the former. Karl has written for lots of comedians over the last decade or so, so you have been laughing at his jokes even when you didn't realise it.

The first 25 tickets are a shockingly underpriced €8 in advance from roisindubh.net, or procrastinate and pay €10.

It's €10 at the door too - although it’s usually sold out in advance, so pre-booking is advised.