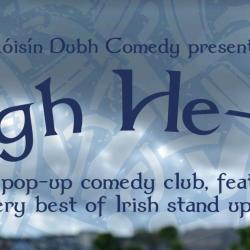 We are keeping the laughs coming into the Autumn at our weekly Tigh He-He comedy club, every Thursday throughout September and October, right up to Galway Comedy Festival. Initially launched in early May as a pop-up comedy club, Tigh He-He has proven a hit through the summer with four different comedians each week.

This series is generously supported by that nice lady in the government (called Róisín, but that's just a coincidence) so tickets are a shockingly underpriced €5 in advance from roisindubh.net, or procrastinate and pay €8 at the door - although it’s usually sold out in advance so pre-booking is advised. Doors 8pm. Age 18+. Line-ups subject to change.

Having started his career in Dublin, award winning Irish stand-up comedian and actor Rory O’ Hanlon is a firm favourite at comedy clubs across the UK and Ireland. Described by Chortle as having “presence, poise and timing” and by the Irish Times as having “a joke every 30 seconds”, his rapid fire delivery regularly has audiences crying with laughter.

Ellen O'Reilly is a musician who turned to stand up after her life went a bit topsy turvy, expect some very filthy stories, bad language and sing-alongy-jokey songs that are not for the font hearted! Described as the female Bill Bailey (with slightly less ass hair), Ellen is sure to leave ya weeping, cringing and releasing much mirth. We might need to put down some towels..

“Brilliantly surreal at times, very confident and endearing, she has a strong connection with the audience. Her physical work is on a par with Lee Evans. Her ad libs keep the audience laughing.” - Joe Rooney, Comedian

A regular around the Dublin comedy scene, Rían has been entertaining audiences around Europe since 2018. Whether discussing the issues a language barrier raises with his in-laws, demonstrating his love of graphs or detailing the many issues with the lyrics in some of his favourite songs, Rían will be sure to leave you laughing and questioning his sanity in the process.

And your host Paul Marsh

Despite making a later in life arrival to comedy than most, Paul Marsh has made up for his late start by making a massive impact on the Irish comedy scene. Paul wasted no time and rapidly racked up winner's trophies in some of Ireland's premier new comedy competitions, winning both the Tedfest Toilet Duck Award 2015 and the Capital Comedy Club Competition in Dublin. Paul has since performed regularly at all the Irish comedy clubs for over 6 years as well as being a Kilkenny Cats Laughs and Galway Comedy Festival regular. Paul is now one of the most in-demand acts in Ireland and the UK.