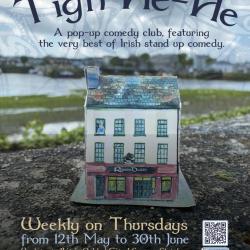 Weekly on Thursdays until 30th June

Sinéad Quinlan is a 26 year old toasted cheese sandwich fanatic from Cork. She is a rapidly rising comedy star. So rapid in fact, in early 2020 she won RTÉ’s national stand up competition, ‘Stand Up and Be Funny’ on the Ray D’Arcy Show (RTE1), with only seven gigs under her belt! And followed that with her RTÉ Player series, Seriously Sinéad? - with a second season in production. You will have also seen her co-hosting The Den on RTÉ2. Her brilliant, surreal descriptions of everyday life will have you in stitches.

After many years treading the boards with amateur dramatics, Janet realised she loved affecting her audience but preferred making them laugh over anything else. Since 2019, she has been a finalist in Dublin’s Next Top Comic and Bray’s Best New Act competitions as well as qualifying round of Show Me the Funny and semi-finalist in Cherry Comedy’s Breakout Act competition this year. She was winner at Goodcraic Comedy Night in Bray.

Janet’s warm personality captures her audience from the get-go and they remain attentive as her stories unfold with unexpected twists.

Danny has been performing stand-up comedy for over thirteen years. His friendly, high energy and anecdotal style draws in an audience and brings on the big laughs with ease. Following in the footsteps of Simon Pegg, Dylan Moran and Dara O’ Briain - Danny was handpicked last year to perform as part of the iconic “Best of The Edinburgh Fest” show in Australia, touring Perth World Fringe, Adelaide Fringe Festival and The Melbourne International Comedy Festival.

“He opened for me at the 3Arena and f*cking murdered it!” - Bill Burr