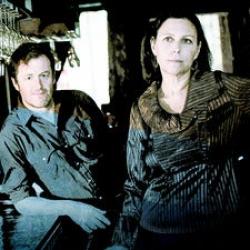 Country-soul group The Delines are the result of the musical collaboration and friendship of Willy Vlautin and Amy Boone.

Former frontman of alt-country pioneers Richmond Fontaine, Willy is also an acclaimed novelist whose books have been made into acclaimed feature films (The Motel Life and Lean on Pete). It’s this character-driven and visually evocative and mood that sets the tone of the music.

Their recently released third studio album, The Sea Drift (Decor Records) received widespread critical acclaim and they join us having completed a run of sold-out show across Europe.

“Here are 11 songs of a romantic, Southern country-soul bent, as economical and well-judged in arrangements and execution as they are in their lyrical content, which is both painfully poignant and utterly unsentimental. The Delines’ way with romance is all their own, and for 41 sweet, orchestral minutes, time is suspended as we watch with our ears.” Uncut – 8/10