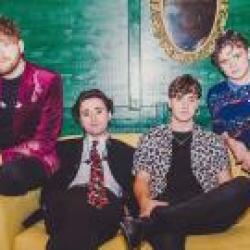 Indie-rock sensations The Academic were a phenomenal hit when they took to the GIAF stage at the 2019 Festival. Their performance came on the heels of the release of last summer’s radio hit ‘Superlike’, and the band has quickly become one of Ireland’s most exciting live acts.
Their return to the Heineken Big Top on 24 July is not to be missed. Tickets, priced at €35, will be available for purchase at www.giaf.ie from Friday 13 December at 9am.
Formed in their Westmeath teenage years, The Academic are Craig Fitzgerald, Dean Gavin and brothers Matt and Stephen Murtagh. From the start, they were known for ‘pure magic’ sets -- no frills, just short, sweet and straight to the point. As Clash Magazine would later put it, “Irish band The Academic don't write songs - they write anthems.”
Massive hits such as ‘Different’, ‘Mixtape 2003’, ‘Bear Claws’, ‘Permanent Vacation’, ‘Why Can't We Be Friends?’ and 2018’s ‘Fake ID’ garnered an ardent following and critical acclaim. Their debut studio album Tales from the Backseat was released in January 2018 and entered the Official Irish Charts at number one. The band has also appeared at some of Europe’s most high-profile festivals and opened for acts like the Rolling Stones, Twenty One Pilots, The Strokes, Catfish And The Bottlemen.
What the Press Says
“It’s time to jump on the bandwagon, these guys are going to be big” – Lauren Murphy, The Irish Times
“Killer hooks once in your brain, will probably refuse to leave” – DIY Magazine
“The Academic show an anthemic wisdom well beyond their years” – Uproxx Magazine