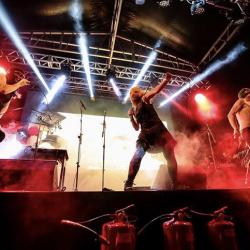 PUSSY RIOT is a Russian feminist protest art collective based in Moscow. Founded in March 2011, the group staged unauthorised provocative guerrilla punk rock performances in unusual public places, which were made into music videos and posted on the Internet. The collective's lyrical themes included feminism, LGBT rights, and opposition to Russian President Vladimir Putin, whom the group considered a dictator. `

They gained global notoriety when five members of the group staged a Punk Prayer performance inside Moscow's Cathedral of Christ the Savior in 2012. On August 17, 2012, three Pussy Riot members - Nadezhda Tolokonnikova, Maria Alyokhina and Ekaterina Samutsevich were convicted of "hooliganism motivated by religious hatred", and each was sentenced to two years' imprisonment.

The trial and sentence attracted considerable attention and criticism, particularly in the West. The case was adopted by human-rights groups, including Amnesty International, which designated the women as prisoners of conscience, and by a number of prominent entertainers. Tolokonnikova and Alyokhina were released on December 23, 2013. After their release, Tolokonnikova and Alyokhina and several other members performed as Pussy Riot during the Winter Olympics in Sochi, where they were attacked with whips and pepper spray by Cossacks who were employed as security guards.

In 2014-2016 Pussy Riot (Alyokhina and Tolokonninkova - together or separately, with different line-ups), recorded and released several videos: "Putin Will Teach You To Love The Motherland", "I Can't Breathe" (named for the last words that Eric Garner said as New York City Police held him to the ground in a chokehold), "Chaika", "Organs", "Make America Great Again".

Alyokhina and Tolokonnikova appeared as speakers in many international festivals, conferences and other events in the USA, Canada, all Europe, Australia, Singapore. They represented Pussy Riot and Mediazona - very influential Russian human rights online media, founded by Alyokhina, Tolokonnikova, and Petr Verzilov (then a husband of Tolokonnikova) in 2014.

Riot Days show is produced by Alexander Cheparukhin and directed by Yury Muravitsky - one of the leading Russian theatre directors, now the artistic director of legendary Taganka Theatre in Moscow.

The show is an innovative combination of live music, theatre and video. It’s a personal story of Alyokhina as a member of Pussy Riot: actions in Red Square and the Cathedral, arrest, court, prison.

The content of the show changes frequently. It adds new episodes and new songs. The prosecution of political prisoners, Russian aggression against Ukraine, all this is reflected in the project.

Riot Days has toured all over the world, it gave more than 200 performances in most of Europe, USA, Brazil, Australia and New Zealand. The project has received prestigious international awards, including Herald Angel Award and Total Theatre Award of Edinburgh Festivals.

In 2021 - 2022 Maria Alyokhina spent more than one year in jail and under house arrest for just social media posts supporting Russian opposition leader Alexey Navalny, who was poisoned and then imprisoned by Putin’s regime.

powerful and exhilarating...
Alyokhina’s collaboration with music producer Alexander Cheparukhin and director Yury Muravitsky was full of fierce, rousing joy, free of scripted cues. ...
poetic, razor-sharp and disarmingly witty...
I left blazing with hope...
Riot Days convinced me that gigs still have the power to move the masses (The Guardian)

Far from being a conventional gig, it is instead a hard-hitting, punk spirited and encapsulating piece of art theatre …

Inventive, passionate, darkly funny in parts, twitching with energy and intelligent defiance and anger and yet full of compassion this is a moral tale for our times delivered with an intense brilliance

What I experienced was not what I expected and was also unlike any live show I have ever seen. And it was incredible

Part gig, part art show and part political demo this was certainly a riot for the eyes, the ears and the brain

Passion, revolution, and bold-ass rebellion – all these things the audience inhaled deeply, lighting a fire in their bellies and driving them out of their seats for a standing ovation

...the most devastating political act, and the highlight of the festival ..Transcendence, for those who truly dare, is an ongoing act of faith and courage

performance was – in every sense of the word – powerful… English subtitles and supporting images helped emphasise key moments of the story and added to the shows already strong dynamics.. The performers clearly gave it their all, as if the weight of the story wasn’t enough to persuade you. Every action and movement was passionate and heartfelt…The whole show was a confronting and emotive force that barraged you for an hour. You felt what they felt at every turn