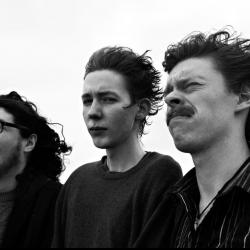 Punching Peaches are a relatively new Galway trio already making waves in Ireland’s buoyant post punk/shouty guitar scene. They emerged fully formed from a basement after a chance encounter between front man Conor King, guitarist Jack Sinnott and drummer Naoise Jordan Cavanagh. Bringing new ideas and a fresh perspective, their first release was the psychedelic tinged Wristwitch which received extensive airplay on Irish radio. They followed up with Maggots: faster and heavier, it is Punching Peaches' most aggressive, straightforward track to date. Their third single Billy? is due for release on October 29 and having just signed to Galway's Blowtorch Records, this is a band on the rise.

Supported by Limerick’s mighty melodic punksters Static Vision, don’t miss this chance to catch the Peaches at the start of a stellar trip. You can say that you were there that night in the Róisín Dubh.