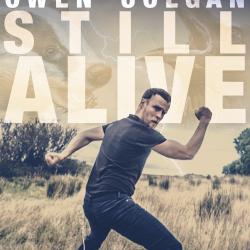 After multiple sold out Irish tours Owen Colgan is back with a brand new show 'Still Alive'. Rescheduled dates have been announced for the tour now running from October to November 2021 with extra shows across Ireland and the UK added due to public demand.

Tickets for this show are also available from Ticketmaster.

Owen Colgan, the Irish cult comedy hero is best known for his role as Buzz McDonnell from Hardy Bucks. He has starred in 4 successful seasons which aired on Ireland's national broadcaster RTE, as well appearing in the smash hit "The Hardy Bucks Movie" - produced by Universal Studios and hailed by media as 'the Irish Hangover'. Owen Colgan has been on a steady rise since launching his stand up career, leaving a trail of sold out shows behind him. Don't miss his biggest show yet!
This upcoming show is a deep look inside the world of an actor and performer who's outlook on life has changed since the cruel virus arrived to this planet. Evolved techniques in dealing with the world and a few guests to join him on this journey. Owen Colgan hopes to see people's faces in the flesh very soon.