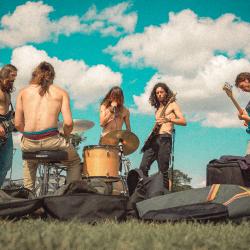 Following the success of their inaugural year in Galway City, classic rock outfit Ol' Times are well and truly on a path of destruction to put Rock n Roll back on the map.

Combining the influences of Led Zeppelin, The Doors, and The Rolling Stones with their own original tone to create a fiery cocktail of heart racing and intensely grooving sounds. Applying various instruments such as acoustic and electric guitars, percussion, keyboards and driving ambition  Ol' Times delivers a sound of Ol' and new.
Derived from diverse backgrounds such as Argentina, Italy and Ireland, Gabriele, Manuel, Kai, Colm and Finn have been developing their sound & energetic live set since February 2019 after a chance meeting on the musical highways of Galway City. After busking their way through Europe leaving their mark on every city they step foot in such as London, Lisbon, Madrid, Florence & Bologna, Edinburgh to name but a few, Ol' Times have gathered a dedicated fan base from around the globe as well as developing an ever-growing following on social media.

After their sold out show in the Roisin Dubh and headline show in Whelan's Dublin following the release of their debut single 'Word After Word' Ol' Times are currently brewing up new material to be released this winter.