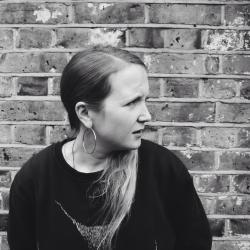 Ted Hughes Award winner Hollie McNish is a poet whose live readings are not to be missed.

Expect strong language and adult content ribbon wrapped in poetry and chat as Hollie reads from her new collection: 'Slug...and other things i’ve been told to hate'.

From Finnish mermaids and soppy otters to Kellogg's anti-masturbation pants, 'Slug' is a book that holds a mirror up to the world, past and present, through Hollie's driving, funny and beautiful words. A blend of poetry, memoir and short story, 'Slug' is an absolutely joyful read about the human condition: from birth to death and her attempt to manage the tangle in-between. It's published in May 2021 with Fleet, Hachette, available now to pre-order

Hollie is a writer based between Glasgow and Cambridge. She has published four poetry collections 'Papers', 'Cherry Pie', 'Plum', 'Slug', one play 'Offside', and one poetic memoir 'Nobody Told Me', of which The Scotsman suggested, “The world needs this book,” and for which she won the Ted Hughes Award for New Work in Poetry. She was the first poet to record at Abbey Road Studios.

Her poems have been translated into French, German, Spanish, Hungarian, Polish and Japanese and she has performed them worldwide alongside the likes of Irvine Welsh, Kae Tempest, Jackie Kay, Helen Pankhurst and Young Fathers.

As well as live readings, Hollie is a big fan of online accessibility – her poetry videos have attracted millions of viewings worldwide.