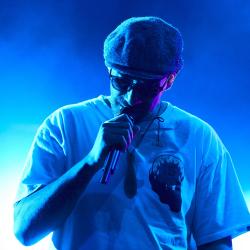 Fat Freddy’s Drop is internationally regarded as one of the world’s finest live draws. The seven piece band has navigated its way from the incubator of sunshine reggae through a colour-saturated field of soul psychedelia before swerving onto a desolate Detroit superhighway at night. This euphoric vibe demands to be heard live, a potent mixture of jazz virtuosity and diaphragm-wrecking digital sonics.

These influences have not only been formed by the band’s individual predilections, but also experiences on the road. Fat Freddy’s appearance at Detroit’s Movement festival in 2006 was a watershed moment for the band. The hi-tek soul movement stoked producer DJ Mu’s love of analog techno, balancing and fusing vocalist Dallas Tamaira’s adoration of soul and reggae with the band’s collective passion for Jazz, Rhythm & Blues, Rock, Disco, House, Post Punk and Balearic oddities.

The shows were poignant re-connections, wowing audiences who had held their tickets tight for over two years after the impact of Covid-19 and local border closures forced Freddys to step out of the rush in March 2020. For a band accustomed to touring interna-tionally annually since 2003, the response was to craft ‘WAIRUNGA’ and ‘LOCK-IN’ live concert albums, recorded and filmed sans audiences, at home in Aotearoa New Zealand.

On ‘WAIRUNGA’ Freddys juggernaut dug deep to debut five songs and revisit two clas-sics. The cosmic boil up of Afro-acid beats, hot buttered soul, righteous reggae, subterra-nean bass and twisted up melodies was captured in an outdoor performance with wild weather elements playing an important creative role. ‘LOCK-IN’ jam session, singing eight songs of hope was recorded at the iconic Michael Fowlers Centre in Freddys hometown of Pōneke, Wellington in 2020. Both ‘LOCK-IN’ and ‘WAIRUNGA’ recordings were given a monster mix by DJ MU at Freddys BAYS studio with final mastering by Bo Kondren at Calyx Mastering in Berlin. The two accompanying concert films, revelling in the music in the making process, were released free to fans worldwide on the Freddys YouTube channel.

Recording a new studio album is now on the band’s To Do list for 2023, a second drop to 'Special Edition Part 1' released late 2019. ’Special Edition Part 1’ consisted of a combi-nation of stress-tested concert detonations alongside studio bullets crafted at the bands own BAYS studio. Tracks such as title song ‘Special Edition’ and ‘Raleigh Twenty’ have grown to become live show favourites for audiences.

Up until the release of BAYS studio album in 2015, Freddys albums, ‘Blackbird’, ‘Dr Boondigga’ and the Big BW’ and the iconic ‘Based On A True Story’, were formed almost entirely on tour rather than in the studio. Songs such as ‘title track Blackbird’ and ‘Shiverman’ evolved live at headlines shows and at festivals such as WOMAD UK, SO-NAR, Bestival, Lowlands, DEMF, Pukkelpop, Glastonbury, The Big Chill and Roskilde. If a song made it on a record it was because it had been road-tested beyond all endurance but studio jams are now just as important for the bands recordings.

Fat Freddy’s Drop may have been around since the early Noughties, but they are truly the most modern of institutions. Independently controlled underground music that has sold in excess of three quarters of a million albums. Yet they are that rare thing: artists that don’t live or die on their last record’s sales. They are a clarion call of hope for the tal-ented few looking for another way. Fat Freddy’s Drop show that it can indeed, be done.