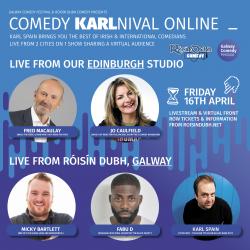 Live from our Edinburgh studio

Fred MacAulay  (Mock the Week, QI and Have I Got News For You)

& Jo Caulfield (Have I Got News For You, Michael McIntyre’s Comedy Roadshow)

And Live from Róisín Dubh, Galway

And our host Karl Spain

Be a part of the action, join the video call and provide the laughs, LIVE. (Very limited number of tickets). With this ticket you are asked to have your mic and camera on, so you’re visible to the comedians & occasionally our livestream audience and your laughter adds to the atmosphere of our show.

We do ask our VIPs to turn their mic down to 25%, and be aware of their surroundings at home, ie: mute themselves during conversations, be aware of the crying baby /  barking dogs / pizza delivery guy - as all the unintentional background noises take away from the quality of the show. If we detect unwanted noise on your end, you will be muted - it’s nothing personal.

You also get access to an extra 30 minutes of banter pre-show from 7:30pm in the “Green Room” with Karl Spain. You will receive the link at 7pm to join the fun from 7:30pm (be punctual), last admittance is 7:50pm. The show will then begin at 8pm.

To avail of our discounted members price, you log in or become a member on roisindubh.net when purchasing the tickets. To become a member of Róisín Dubh you simply sign up to receive our weekly(ish) newsletter. As well as discounted tickets, being a member allows you to access your order history to resent or print/reprint your tickets at any time.

Having presented the very funny and eventful MacAulay and Co. on BBC Radio Scotland for almost 18 years and with a string of tv appearances, Fred’s on air witticisms and on screen reputation are the product of years of experience on the live circuit, including a stint as the first ever-Scottish compere at the Comedy Store in London.

Arriving late to the world of stand-up comedy in the early 90’s, he has gone on to be a regular at the Edinburgh Fringe (this will be his 29th) and at comedy festivals worldwide. Appearances on many Radio 4 comedy panel shows including I’m Sorry I Haven’t a Clue, Just A Minute, The Unbelievable Truth and The News Quiz guarantee an audience for Fred’s Live stand-up tours.

He has successfully featured in and presented many programmes for BBC Scotland: he hosted the talk show McCoist and MacAulay and presented Life According to Fred, Hoots, Simply Fred and Scots on the Box, as well as the 2014 On The Road magazine programme with Martell Maxwell.

On national BBC Television he has been a panelist on shows including Mock the Week, QI and Have I Got News For You. In addition, in the US he was a guest on The Late Late Show with Craig Ferguson and his performance at The Montreal Comedy Festival has been shown coast to coast in North America as well.

Whether you’ve seen her on TV shows such as “Have I Got News For You” or “Michael McIntyre’s Comedy Roadshow”, heard her on the radio on “Just a Minute” or “Stop The Press”, or caught her live at one of her award-winning Edinburgh Festival shows, the chances are you’re already familiar with Jo’s work.

Described by The Observer as “one of the finest female comics at work” and by The Scotsman as “quite simply, a damn funny woman” Jo can regularly be seen headlining the UK’s biggest and best comedy clubs. She is also in high demand on the corporate circuit, speaking at and hosting dinners and award ceremonies for many leading companies across the UK and beyond.

Behind the scenes Jo is a respected writer, having served as a writer / programme consultant on all five series of Graham Norton’s BAFTA Award winning “So Graham Norton” and as head writer on both Ruby Wax’s “Waiting Game” and Zoe Ball’s “Strictly Dance Fever”. Jo has also written for – among others – Joan Rivers, Ant & Dec and Anne Robinson. Jo is also a popular and respected warm-up for many high-profile TV shows.

Big Micky Bartlett is gathering both momentum and acclaim as one of Northern Ireland’s fastest rising stars on the live stand-up circuit. Also a regular on BBC Northern Ireland panel shows “The Blame Game” and “Monumental”, hilarious Micky came to prominence after winning the BBC NI stand-up talent show “Find me the Funny”.

In 2012 Micky supported Patrick Kielty on his tour of Northern Ireland, and performed in the Belfast recording of Dave’s One Night Stand. He made his Edinburgh Fringe debut in 2014 and has returned a number of times since with widely acclaimed solo shows.

“Consistently funny… In years to come, people will be talking about the first time they saw Micky Bartlett” - Adam Hills

“Bartlett is a stand-up natural with a great command of the audience and engaging everyman approach, full of verve… A masterful way of delivering with punch and style… Impressive!”  - Chortle

Fabio David, better known as Fabu-D is a comedian, MC, entertainer and actor and based in Dublin, Ireland. Born in Nigeria, FABU-D channels the African man in Europe and embraces the Irish culture throughout his live sets. He quickly made a name for himself while performing on the streets of Dublin and creating viral videos which have amassed over 150 millions views online.

Fabu-D is one of the most well-known MCs in Ireland and has made appearances in TV shows and music videos. He has featured on The Lad Bible, The Wall of Comedy, Unilad, World Star Hip-Hop and more.

This show is hosted by the “achingly funny” Karl Spain.

As well as being a regular at Róisín Dubh, Galway Comedy Festival, Vodafone Comedy Festival Dublin, Cat Laughs Kilkenny, Edinburgh Fringe Festival and Montréal Just for Laughs, Karl was a resident writer for Republic of Telly and still is for countless other comedians.

“The future of Irish comedy is in safe hands” - HOT PRESS