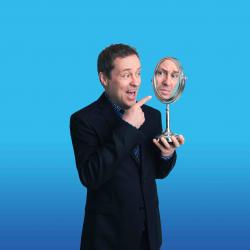 with support from Emma Doran

The star of Death in Paradise (BBC One), Father Ted (Channel 4) and My Hero (BBC One), Ardal O’Hanlon is one of these islands’ leading stand-up comedians and actors. He has received British Comedy Award, BAFTA and Olivier nominations, toured worldwide with his acclaimed stand-up shows - and appeared in numerous TV shows from Dr. Who (BBC One) and Skins (E4) to Live at the Apollo (BBC Two).

“Displays a proficiency of delivery which puts him well ahead of the pack. He is a complete joy to watch, planting the sort of silly images that bump around in your head forever” - The Guardian

Emma has performed at some of the country’s best and biggest venues like 3 Arena, Vicar St and the Olympia Theatre. You’ve also seen her  on the telly, honestly ( Bridget and Eamonn, Saturday Night Ray D’arcy Show, other bits and bobs). She’s also gone more than a bit viral in recent months  with her stand up and sketches being shared all over the world.

“One of the hottest young stars in Irish comedy” - Irish Independent

As well as being a regular at Róisín Dubh, Galway Comedy Festival, Vodafone Comedy Festival Dublin, Kilkenny Cat Laughs, Edinburgh Fringe Festival and Montréal Just for Laughs, Karl was a resident writer for Republic of Telly and still is for countless other comedians.

“The future of Irish comedy is in safe hands” - Hot Press

Please note: All ticket holders must be fully vaccinated. COVID certs/proof of vaccination will be checked at the door, along with a valid I.D. This is in line with the guidelines issued to us from HSE regarding indoor events.