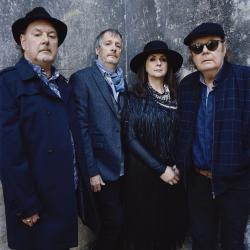 Clannad are celebrating an exceptional award winning 50 year career with the announcements of a farewell world tour. They will perform in Wexford, Limerick, Galway and Limerick in March 2022. Tickets will be available from venue box offices and Ticketmaster.ie, www.clannad.ie/live from Friday 23rd April at 10am.

To coincide with this very special Farewell Tour, BMG have released ‘In a Lifetime’ Anthology; a multiformat, career-spanning anthology containing tracks from Clannad’s 50-year recording career. It is available as a 38 track 2CD set, 2CD deluxe, 2LP, 2LP deluxe and an expanded deluxe 100+ track set as well as digital versions. The anthology will both delight and excite Clannad’s enormous and loyal fanbase as well as introduce this legendary, influential and culturally important band to a whole new generation of music fans.

The multi-award winning Clannad have without doubt done more than any other group to take Irish music and the Irish language to a worldwide audience. Fusing elements of traditional Irish music with more contemporary folk, new age, and rock they have created a beautifully unique and ethereal sound which combines haunting melodies and mesmerising vocals to transcend the sands of time whilst appealing to a worldwide audience of all ages